Read more and book tickets for the performances here Tanssi means ‘dance’ in Finnish, and this new tableware collection, illustrated by London-based Finnish artist Klaus Haapaniemi, has been inspired by the visual designs he has created for the Finnish National Opera production of The Cunning Little Vixen, a Czech opera by Leoš Janáček. The production will be premiered in January 2015.

The sad yet beautiful story exploring the co-existence of animals, humans and the eternal cycle of life, comes alive in Haapaniemi’s rich designs on tableware created by pre-eminent Finnish designer Heikki Orvola. The colourful inhabitants of the mystical forest captured on the tableware include a deer charming the forest with the sounds from his flute, a badger showing off in his fur coat and silk shoes, and the vixen and a fox dancing in the shadows of the trees. Reflections from both ancient Oriental and Slavic imagery, as well as traditional stories, shape this collection.

Tanssi also brings a new dimension to Iittala’s decorated tableware with a new colour palette. The earthy colours and detailed, distinctive pattern give collectors new items to covet. Tanssi makes a good addition to any current Iittala collection, and goes well with basic pieces such as Teema, or the everyday Kartio glasses. In addition to the ceramic pieces, the Tanssi range includes interior textiles, such as kitchen towels, and storage items, including a round tin box. Designed by Klaus Haapaniemi and Taneli Mansikkamäki and Made in Finland from polished brass, with clear lacquer and American walnut, these artistic pendant lights will be shown in three designs and sizes: bee, bat and pinecone, with the motifs created by small perforations in the brass. When the light is off the designs are subtle and intriguing; when turned on the light shines through the tiny holes making for an ethereal glow. Limited-edition range of upholstered wood sofas in collaboration with the Finnish sustainable-wood furniture brand, Nikari. Klaus Haapaniemi and Nikari are re-launching the limited-edition redesign of Nikari’s classic JRA3 as BLOOM sofa during this month’s London Design Festival. Haapaniemi has customized the popular birch sofa with an angled back engraved by Nikari craftsmen with a series of original patterns. The soft elements have been upholstered in Haapaniemi’s new Nocturnal Bloom fabrics, also launching this month. 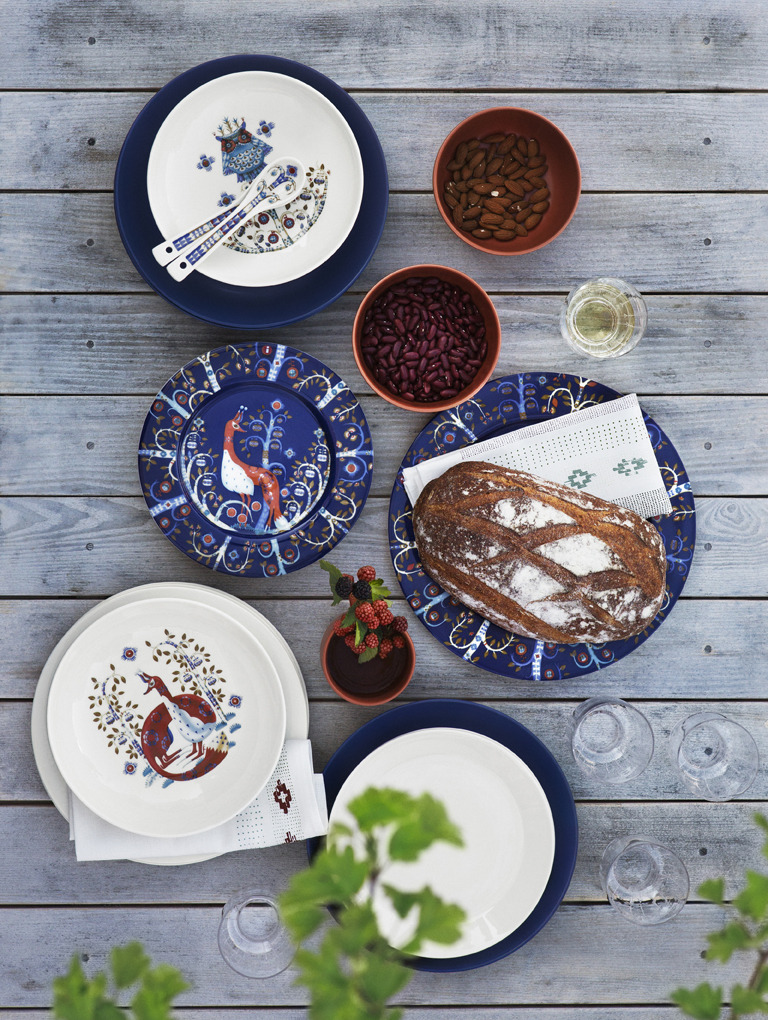 In the new Iittala Taika parts Klaus Haapaniemi has re-examined the animal characters. "The new parts bring the characters to the fore. I have played around with them—the fox has for example curled up into a ball." The way the pattern is incorporated onto the surfaces brings a sense of lightness to the series. "To me, the shape dictates how the pattern is used," Haapaniemi says. "I was inspired by Art Nouveau style compositions, where the pattern is in a controlled collision with the shape of the dish."
See all the parts on Iittala website